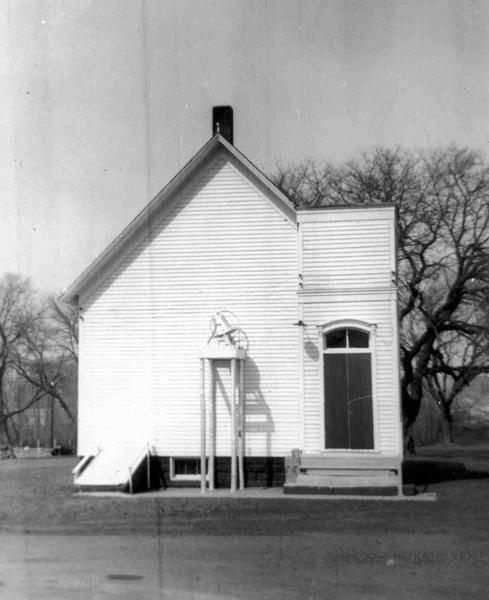 Calvary Baptist Church, Manning, had its beginning in the nearby community of Botna. Louis H. Miller, a student at Omaha Baptist Bible Institute in Omaha (now Faith Baptist Bible College in Ankeny, IA), came to Botna in the summer of 1953 and held a Daily Vacation Bible School in the old United Brethren building. Pastor Miller with the help of many of the area residents renovated the building.
In the summer of 1954, Pastor Miller with his wife and two daughters came and held another Bible School, and feeling led of the Lord to have regular Sunday services, they came each weekend and returned to Omaha for weekday classes. In the summer of 1955, he and his family moved to Botna to assume full-time ministry, supporting his family by working for area farmers.
The church was organized January 10, 1956, with a charter membership of only eight members, becoming associated with the General Association of Regular Baptist Churches. The Millers left Botna for ministries in other places in Iowa but returned as pastor from 1975-1982. The church has enjoyed slow but steady and encouraging growth through the years.
In 1963 the congregation saw an advantage to moving to Manning. In April 1963 they purchased the former Zion Lutheran building on Second Street. The first worship service in Manning was held June 16, 1963, with Rev. Wilburn Hon as pastor. The former parsonage was purchased in July 1964.
June 15, 1985 fire broke out destroying the roof and damaging the interior of the building. The congregation was grateful for the firemen who responded to the alarm. Because of their efforts and the providence of God, the structure was saved as well as the stained glass windows and a majority of the pews. Many were generous in their offers of assistance: Zion Lutheran allowed Calvary Baptist to hold Vacation Bible School in their church during the week after the fire; First Presbyterian Church invited them to use their building for Sunday services, which they did for a month; and Pastor and Mrs. Miller, who were out of town building churches at the time, offered the use of their home for regular services until the repairs were completed. After five months of intensive rebuilding, a praise service was held in January 1986 to thank and praise God and to thank the contractors and individuals who completed the project.
In the fall of 1986, off-street parking was added to the front property line. The congregation added a stair chair in 1991, making the sanctuary handicap accessible. In March 1992 Pastor Louis Miller was installed as Pastor Emeritus and recognized for being in the ministry 40 years.
In 1994 an Awana program was begun. This is part of an international organization striving to reach boys and girls with the gospel of Christ and to train them to serve Him. “Awana” is an acronym of “Approved Workman Are Not Ashamed” based on 2 Timothy 2:15.

The following men have been pastors at Calvary Baptist Church through the years: